Have a look at Google Maps – Federation Walk is featured!

So put your runners on, tighten up your exercise gear, fill a water bottle….then relax in your arm chair!

We have over the many years ‘worked’ with many to achieve this and with new technology thanks to Gold Coast tourism, it is now possible.

The vegetation at the start of the pathway was planted by volunteers nearly 20 years ago!!

The area known as The Spit is the northern most section of mainland oceanfront on the Gold Coast, Queensland. This area has the largest area of undeveloped sand dunes on the Gold Coast mainland and as such is a very popular recreation area. The Federation Walk Coastal Reserve is a 93 hectare section of coastal sand dunes on the eastern side of The Spit set aside as public open space, this Reserve was originally in the northern section of Philip Park, which still remains. This sand spit has previously been sand mined and consequently revegetated in the 1970’s.

In 1998, The Main Beach Progress Association (MBPA) formed a sub-committee with the aim of restoring and conserving The Spit as a public asset for the benefit of the community. This Committee obtained a $75,000 grant from the Queensland Government under the auspices of Centenary of Queensland funding to prepare an overall masterplan for the area and a more specific vegetation management plan to guide the restoration work. Gold Coast City Council (GCCC) constructed the formal 3km pathway joined with the Oceanway pathway, through the hind dunes from Philip Park car park to the Gold Coast Seaway, for people to enjoy the natural beauty of the site, there are 9 beach access paths from Seaworld Drive..

The first community planting day was held on 19 March 2000 Over 100 people attended this official launch of the project including State and Local representatives.

A consultant was engaged by the community group to prepare an overall master plan for the management of the entire Federation Walk Coastal Reserve . The issues addressed by this master plan include restoration, conservation, education, infrastructure and recreation.

A vegetation management plan was completed at that time and forms the guidelines for the restoration and conservation work that has been currently underway on site since.

Currently these planning documents, prepared by the local community have been presented to GCCC and are in the process of being adopted. Both these documents are continually referred to by Officers of Council.

The project grew quickly and a separate entity was formed to oversee the work they had planned. Members of MBPA and many other residents of the Gold Coast outside of Main Beach incorporated a group known as Friends of Federation Walk Incorporated (FoFW). The community group successfully lobbied the Queensland Department of Natural Resources and Mines to have the area Gazetted from  a Park and Recreation area to a Reserve for Park, Environmental, Beach Protection and Coastal Management purposes. A further $25,000 has been donated to the community group by the State government through this Department.

At the request of FoFW, the whole area has been renamed the Federation Walk Coastal Reserve (FWCR) and ratified by Council.  It was previously known as the northern section of Philip Park in honour of Prince Philip. This renaming was a significant step in the groups efforts towards recognising The Spit as a natural bushland Reserve in the heart of the city.

The Work for the Dole, Green Corps and Green Army crews also worked on the site.

Now that the area has been successfully protected as public land for Environment Purposes the community is focusing on the restoration of the habitat. This revegetation project consisted primarily of casuarina and acacia trees that lacked diversity, the aim  of the vegetation management plan is to restore the biodiversity of the area using the vegetation community on nearby South Stradbroke Island as a guide. This restoration has been hugely successful  and has contributed to the proliferation of fauna and bird species.

Volunteers hold regular planting and maintenance days on the last Sunday of each month, 10 times/year. In addition to this many school, corporate and community groups bring students, staff and members to learn about the coastal environment and take part in planting days.

In 2006, the State Government allocated $100,000per year to assist in the maintenance of FWCR, this was matched by GCCC but a new State Government halted this funding. GCCC has funded this amount since and has allocated a further $30,000 per year from Division 7. A signage suite has been adopted by FoFW for the Reserve, including wayfinder signs and interpretive signage to guide and inform visitors of the many areas of the Reserve. 50%  of this signage has been implemented by GCCC.

Friends of Federation Walk Management Committee has worked tirelessly to make this all happen. Working closely with the local community, Australian, State, Local Governments, Tourism bodies and  like minded major and small community entities,
we have ensured its permanence.

WE LOOK FOR YOUR SUPPORT IN THE PRESERVATION OF OUR PROJECT.

Integral to your support and involvement in ‘The Spit Master Plan Process’ are the objectives and vision for Friends of Federation Walk Inc.

OUR OBJECTIVE is a long term vision for Federation Walk and can only be maintained by the community group specific to the FEDERATION WALK PROJECT guided by the Federation Walk Management Plan.

OUR PROJECT is to prepare a Master Plan for the regeneration of the vegetation of The Spit on the eastern side of Seaworld Drive, north to the Gold Coast Seaway from the carpark opposite the Seaworld roundabout. To create public access for passive recreation, and ensure present and future generations of the community have access to enjoy, appreciate and care for The Spit.

OUR OBJECTIVE is to maintain Federation Walk Coastal Reserve as a natural Public Open Space for the benefit of the Community.

As this process involves community consultation we have included the Media Release Minister for State Development, Manufacturing, Infrastructure and Planning, Cameron Dick, which includes links for you to find the best way you can ‘HAVE YOUR SAY’.

The community will have an opportunity to share their experiences of The Spit and their aspirations for its future at a series of pop-up engagement sessions throughout February and March as part of the consultation process for The Spit master plan.

Minister for State Development, Manufacturing, Infrastructure and Planning, Cameron Dick said the master plan will establish a shared vision for the long-term future of The Spit.

“The community will be involved throughout the master planning process, as we work with a highly talented group of planning and design experts to produce an outstanding master plan for The Spit,” Mr Dick said.

“This is a fantastic opportunity to create jobs for the Gold Coast through tourism, entertainment and recreation, while preserving the character of The Spit.

“People can visit https://www.qld.gov.au/southport-spit ( https://apac01.safelinks.protection.outlook.com ), to find information about the pop-up sessions and how to subscribe to receive updates about the consultation process.”

Member for Gaven, Meaghan Scanlon said the pop-up sessions offered residents the perfect opportunity to have their views heard on the future of The Spit.

“I would urge everyone who is interested in the future of this iconic part of the Coast to visit one of the pop-up stalls and have their say,” Ms Scanlon said.

Information collected at the pop-up sessions will feed into a major consultation event to be held in late April, which will enable key stakeholders to put forward their vision for the future of The Spit and contribute to setting the direction of the master planning process.

The Coordinator-General has independently assessed the City of Gold Coast’s application for its proposed ocean-side cruise ship terminal to be declared a coordinated project and, in light of the current master planning process, has decided not to declare the project.

Mr Dick said the recent release by the government of an Invitation to Offer for master planning services is an important step in the master plan process and encouraged interested consultants to visit the Queensland government’s QTenders website.

Offers must be submitted by 2pm Tuesday 6 February 2018. 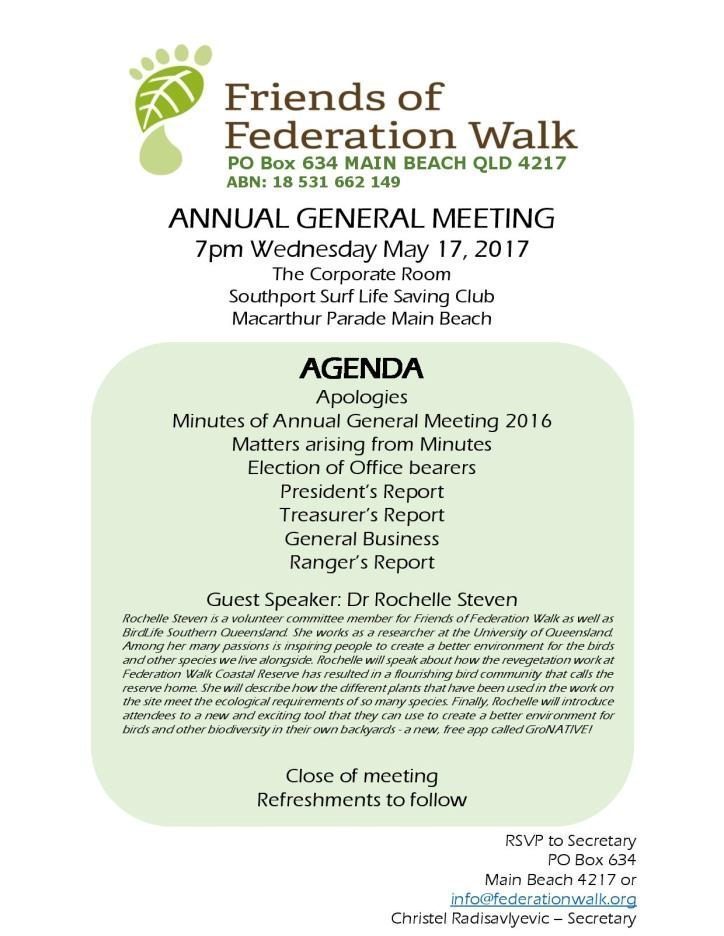 Friends of Federation Walk have been actively restoring the reserve since 1999 in partnership with the City of Gold Coast.

In 2012 the State Government funding was withdrawn.

The Trustee for this Reserve is the City of Gold Coast.

This Reserve was gazetted in 2003 for Park, Environmental, Beach Protection and Coastal Management purposes; it is dedicated as trust land under the Land Act 1994 for Community Purposes. These are:

Environmental Purposes: Where a parcel of land contains a particular type of flora or fauna or geological occurrence and warrants protection, but the size of the area and/or the relative scale or extent of the attribute is not sufficient to establish and manage as a separate national park or other conservation tenure.

Coastal Management: Coastal management includes the protection, conservation, rehabilitation and management of coastal resources as defined in the Coastal Protection and Management Act 1995.

Environmental purposes: Where a parcel of land contains a particular type of flora or fauna or geological occurrence and warrants protection, but the size of the area and/or the relative scale or extent of the attribute is not sufficient to establish and manage as a separate national park or other conservation tenure. 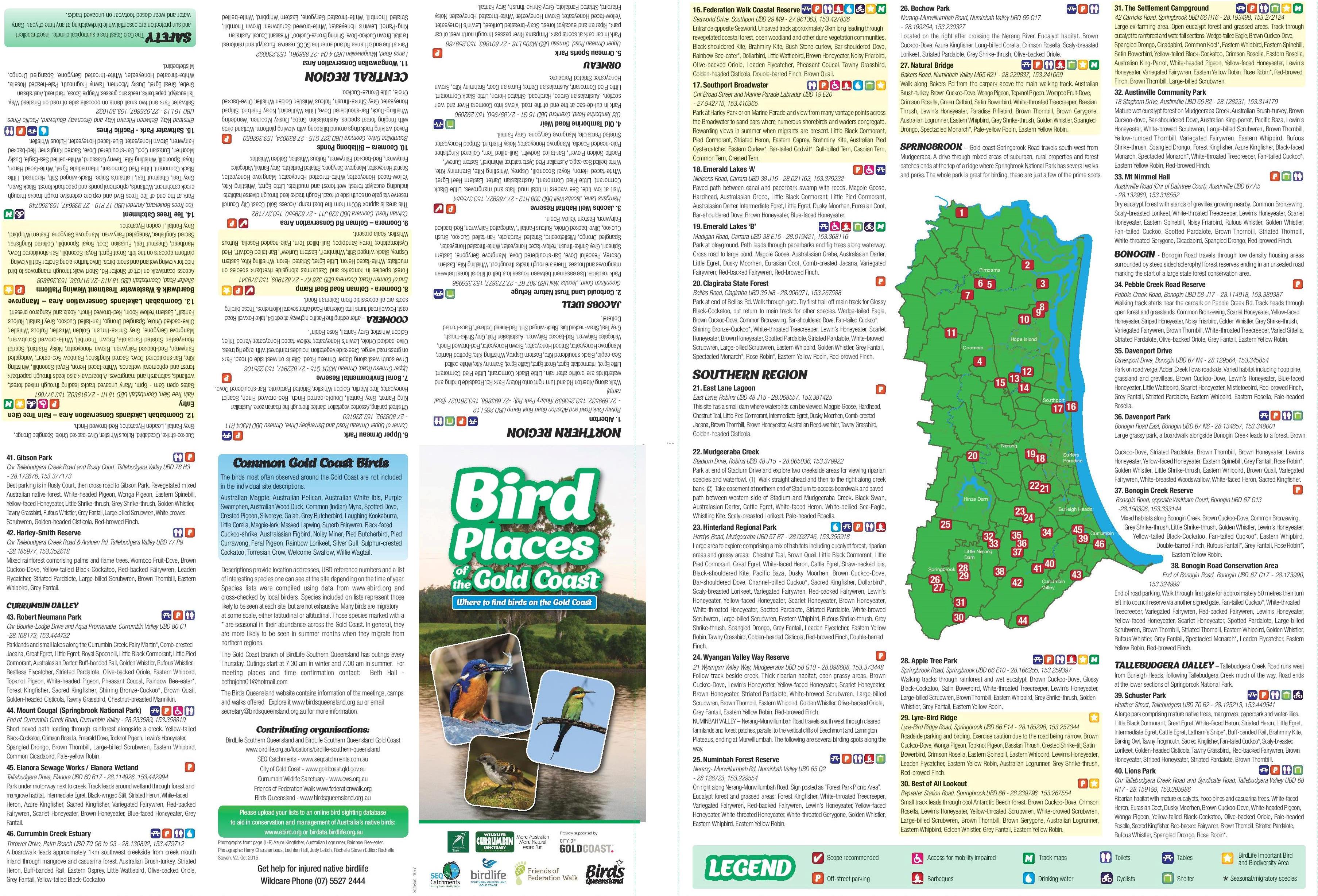 These Brochures can be collected from all Council Libraries.. 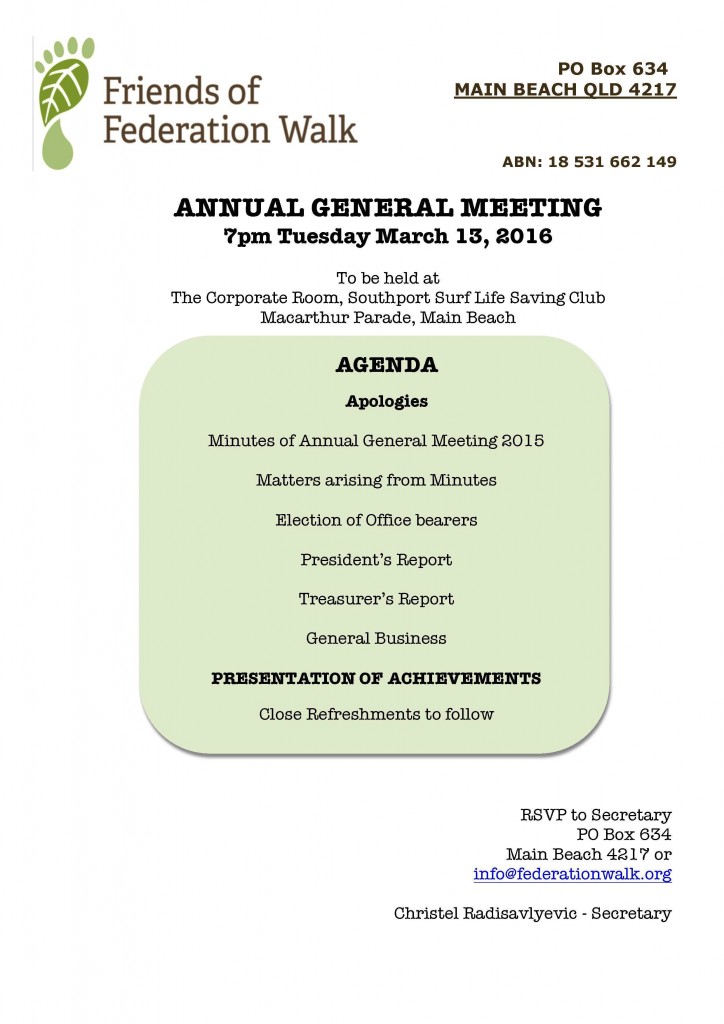